I’m back and Scene_MenuBase [RMXP]

Well I’m back to fix errors and submit my Scene_MenuBase. I was doing school work so I was away at the time. Hopefully this update will fix some issues that people were having before I take a look. The Scene_MenuBase acts as a base script for my ACMS scripts, and it is required for each of those scripts. It has a number of shared classes and methods that thereby reduce unnecessary coding for those scripts. I’ll submit a demo later, I have to fix it up a bit. Now after this the only thing left is fixing errors and finishing the WCBS.

WCBS (A Work in Progress)

I’ve been saying this for months now and now I’ve finally began writing the script now that my ACMS is almost complete I thinks it’s time to start on this system. This script will be a more advance version of Tankentai, a script litter with tons of bugs, with more functions. Hopefully by the end of this I can design this to be more “Generic” with a very high level of customization. As of right now not much is done to show for. Hopfully in 2 weeks I’ll have images and then a video to show. I ask for beta tester when the time comes.

WCBS works as a foundation for future battle engine add-ons. It allows for easier management of the battle engine without adding too many features, allowing users to customize what they want as they see fit. While the WCBS isn’t an entirely new engine, it gives users control that RPG Maker XP didn’t originally give them.

My ideal is to have a system where the battle shows the actors in battle using their default character set like in Tankentai, while allowing for directional changes for actor and enemy battlers whenever the developer wants through script call.

new script, no updates this times. However for this script this completes my ACE Custom Menu System (besides the random addons in the future.) The ACE Save System provides a new save interface for the player. Along with a new interface, the player can also load and delete saves straight from the menu itself. This will in turn make the save command from the Main Menu always available, but the save option within the new save menu will be enabled depending on whether or not it is allowed or disallowed. From the interface, the player is given more information regarding the save file including the the location the player saved at, the amount of gold available, and any variables that you want to show the player as well.

Okay I like the next script is my Debug Extionsion script, after I figured out howThis script, in by no means, is meant for player use. This script offers an extended debug menu that is more accessible and cleaner to use than what the default debug menu has to offer. The goal of this script is to ensure that the users receive proper and detailed information regarding their games during test play during test play

So this is update 4, no new script at the moment as I’m working on Warrior Side View Battle System right now though I might release some scripts before the end of the month. MAYBE. Anyways here are your two updated scripts 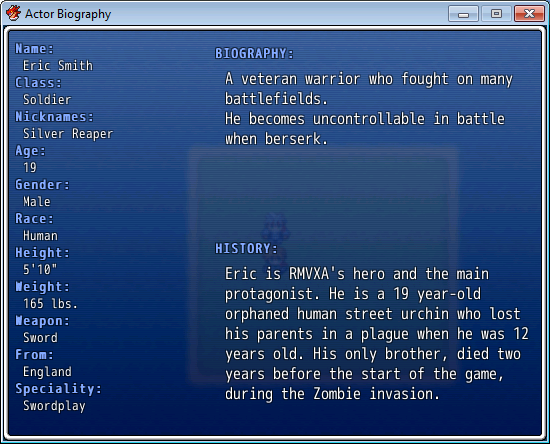 This script, that was converted from RMXP, calls a window that displays different aspects about a character… like their age, height, gender etc. These can be changed though. Along with that, the script allows for the ability to change the descriptions for actors during the game.

First out of 2 menu add-ons, this script gives the player the ability to change the party formation in the menu, nothing much else.

Second of the 3 ACE Item System addon scripts, this script to give the player’s items a limited shelf life. This script will remove the old item from the item screen and be replaced with it’s rotten replacement after a set amount of frames have passed. The player can have their rotten equivalent do anything that a normal item would do, so go nuts!

First out of 3 addons for the ACE Item System, this script allows you to delete items from your inventory.

Relatively simple idea. The battle arena lets you compete in Ranking Battles of Opponent Groups of your making. No need to make them in the database, just alter the contents, and the troops are created for you! Progressive Battling, so you can take your money and walk, or gamble it and continue on in battle.